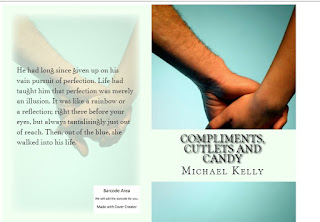 Compliments, Cutlets and Candy.   By Michael John Kelly Chapter One   The whole of the moon   He had long since abandoned his long and fruitless pursuit of perfection. The cruel vagaries of life had taught him that perfection was merely an illusion. It was like a rainbow, or a reflection in a still, clear stream. A thing of beauty, right there in front of his eyes, but remaining forever tantalisingly just out of reach. The reality was that there was always a flaw; always some tiny imperfection that would spoil even the most magical of moments. He had slowly and reluctantly accepted that near- perfect was as good as it ever got. That fateful Saturday morning in Bristol was a prime example. It was April 11th, 1992, and all the ingredients were there for the making of a perfect day.   Saturday was, by some way, the highlight of his week, and not only was the weather set fair, but it was spring, and spring that fairest of all seasons, had always been his fa
1 comment
Read more
- June 02, 2018
An audience with Gloria An extract from Just a boy from Bristol Part2   “Good riddance to bad rubbish,” said Dad quietly as he lit a cigarette and settled back into his rocking chair. Only a few minutes earlier we had been dancing around the living room, playing happy families, as we held hands and sang Auld Lang Sine together. Now, it was all over. The church bells had stopped chiming, the car horns had ceased beeping, and the dustbin lids were no longer clattering. The streets of Bristol fell silent again. It was 1st January 1950; another new year was upon us; it was time for yet another round of well-intentioned resolutions, but It was also time for a period of reflection. Time to look back on last year’s shattered illusions and broken dreams. “A new decade, which is rich with promise. Now, we will see and taste the fruits of victory.” Dad was waxing lyrical. He always waxed lyrical after a couple of pints. I had been looking forward to 1950 with anticipation, because it
Post a Comment
Read more
More posts