If at first you don't succeed, try, try, and try again.

Miss Lynch, who other than my mother, was my very first heroine, and also my teacher at St Mary on the Quay, taught me that these words were first used by Robert 1 of Scotland (Robert the Bruce), a 14th century king who, according to legend, having suffered a major defeat at the hands of the English, went into hiding in a cave near Gretna. It was whilst here, that he watched a spider trying to spin a web. Each time the spider failed, it simply started again. According to Miss Lynch, Robert was so inspired by the tiny spider that he left the cave and returned to lead his troops to a number of victories against the English.

Be that as it may, it was an adage that was drummed into me from my early years by my mother and my father; by my teacher, Miss Lynch, and by Jasper Barnidge, my formidable Headmaster. By the age of 10, I was already a fierce and determined competitor, particularly in all things sporting. The long, bitterly freezing  winter of 1947, was followed by an equally long, hot and golden summer. Between those two seasons of extreme temperatures came that most special of all seasons, Spring. England was still in the early stages of recovery from the war years, and Bristol was still in recovery from the blitz, but we had now experienced  the giddy excitement created by the resumption of professional football and cricket, and we wanted more. There were widespread rumours that the following year would find London hosting the first post war Olympic Games. The news fuelled my young imagination and I had visions of my childhood athletics hero, the balding, slightly built Sydney Wooderson, winning gold at the mile. More to the point, I was more than ready for the City District Wolf Cub Sports, when they were held on the 17th May 1947. The venue was a little less dramatic than Wembley Stadium, being the bombed building site of the old Headquarters of the 6th Battalion Gloucestershire Regiment. The tall, imposing building had graced the top of St Michael's Hill for many pre war years, but the onset of the clinical and sustained bombing raids by the Luftwaffe had quickly brought it to a sorry end, the beautiful old Georgian house taking a direct hit on the night of 27th February 1941.

The bombed building site had been cleared and levelled, part grass, but mainly cinders, and had become an adventure playground for the boys and girls of the district. It was frequently used for football matches and several boys, including John Sherman and Phillip Davidson honed their fledgling skills on that patch of land before performing at senior level for leading local, amateur sides. In 1973, the site was developed and St Michael's Hospital became part of the Bristol scene.

I arrived on the afternoon of the 17th May 1947, proudly wearing my wolf cub uniform, and sporting the yellow and white papal coloured neckerchief of 226th pack. I was breathless with excitement as I slipped on my new black daps and prepared for my two events. Mum had prepared me well for the Thread the needle race, spending endless hours with needle and thread, but still I struggled with the threading, and could only manage second place. 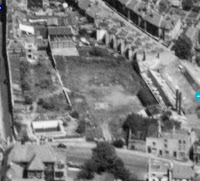 My big moment was the 50 yard under 10 flat race. I led for more than 49 of those 50 yards, but in the final stride, Derek Davies eased past me for victory. Derek was already a local celebrity having won National schoolboy honours in the swimming pool. He approached me now, wearing a smile and extending his hand, but I turned away. I was, not only competitive, but also a bad loser.
"Many a boy would give their right hand for two second place certificates," said Mum when I arrived home. 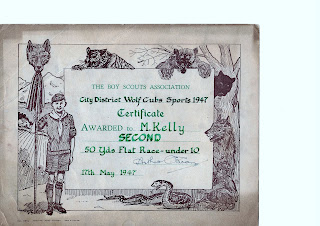 "If at first you don't succeed, try, try and try again," said Dad.

I didn't need to be told, I was already planning for revenge in 1948, but that's another story. 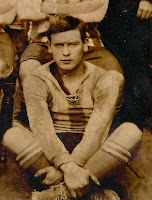 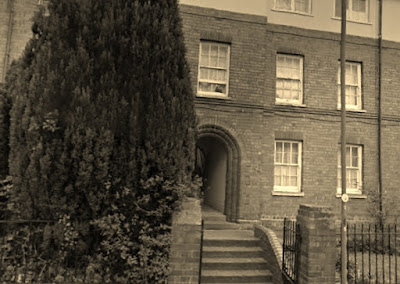 JUST A BOY FROM BRISTOL PART TWO   Chapter Eight     Somewhere down by the Ropewalk     It was a lazy, grey Friday evening in late September 1951 when the two girls took a wrong turning and came wandering into our young lives. 'Scattered showers', had been the official forecast, but although the clouds were threatening, the rain hadn't arrived. One by one, our little gang gathered on the steps outside of number 2 Marlborough Flats, Eugene Street, Bristol. This was the home of Johnny, Frankie and Alan Millar, who were three of the members of our little gang. Another weekend was upon us, and, we always met here to discuss the events of the past week, and make our plans and arrangements for the next seven days. Bristol Rovers were entertaining Norwich the following day, so Saturday afternoon was already taken care of, because we would be taking our usual places on the Tote End at Eastville. Rovers had made a promising start to the season, and we
Read more